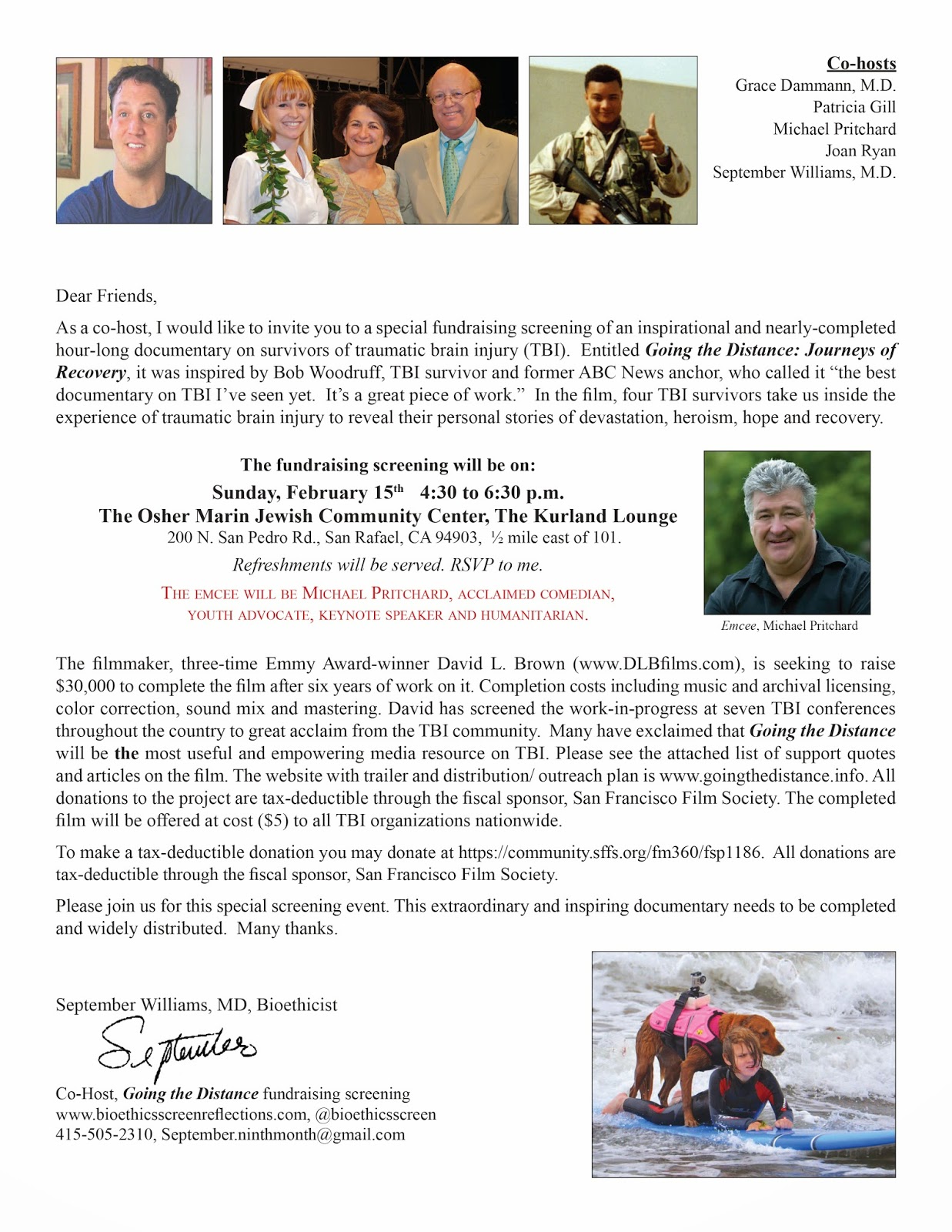 SEE:
http://www.bioethicsscreenreflections.com/2014/12/going-distance-meets-surfing-for-life_15.html
Posted by September Williams, MD at 11:58 AM No comments:

Bioethicsscreenreflections.com is happy to announce the film STATES OF GRACE Hits Bay Area Theaters THIS MONTH OF JANUARY 2015!

States of Grace hits Bay Area theaters to coincide with the installation of a movable median barrier on the Golden Gate Bridge in early January. Dr. Grace Dammann’s life was forever changed when a driver crashed head on into her car during a routine commute across the bridge in 2008.

Join us for one or more screenings. Expanded Distribution of Films is dependent on initial viewership in limited release theaters - TO HELP and for ticket information go to: http://openstudioproductions.com/states-of-grace/ 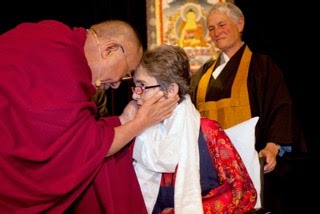 After spending more than a year in rehabilitation hospitals, the film follows Grace as she returns home to Green Gulch Farm Zen Center in Marin, where she lives with her partner Fu Schroeder and their adopted teenage daughter Sabrina. Family dynamics are turned upside down as each of them must negotiate new roles and responsibilities. Through intimate verité footage and interviews with Grace’s doctors, family, and friends, States of Grace paints an inspiring portrait of trust and devotion as it delicately documents the pain and power of one woman’s fight to reinvent herself.
Honored with audience awards at the Mill Valley, Seattle Lesbian & Gay, and Napa Valley film festivals this fall, viewers have cheered States of Grace as “a moving, complex, and powerful journey” and “a knockout filled with beauty, wit, and compassion.”

Join filmmakers Helen S. Cohen and Mark Lipman in person at all six Bay Area screenings. Grace and Fu will also be in attendance at the Rafael Film Center on January 8. Get your tickets now and spread the word to family and friends! Don’t miss this chance to see States of Grace on the big screen!

STATES OF GRACE: Disability and Chronic Pain as a Bioethical Issue

STATES OF GRACE is a “must watch” film for health care providers. It deals with the health of caregivers, professionals and families, as well as that of persons who have become disabled. In STATES OF GRACE, Dr. Grace Dammann, is a revered physician who signed more than one thousand death certificates during the height of the HIV/AIDS epidemic. In 2008, just before memorial day, while commuting from work, another driver crashed head-on into her car as she crossed the Golden Gate Bridge.

After seven weeks in a coma and twelve surgeries, Grace regains consciousness, her cognitive abilities surprisingly intact though her body left shattered. That’s the easy part of the story. When Grace returns home, following a year in rehabilitation hospitals, consummate Filmmakers Helen S. Cohen and Marc Lippmann shadow her and her family. Four years later, Grace remarkably returns to work, in her wheelchair, to serve in an innovative pain clinic that cares for San Francisco’s most resource stressed communities. The film’s eloquence is underscored by the work of acclaimed editor Kenji Yamamoto.

To be honest, as stated on this site in 2010, “Grace's life and persona before the accident was remarkable.” His Holiness the Dalai Lama presented Grace the Unsung Heroes of Compassion Award for her care of thousands of AIDS patients, during the era when HIV/AIDS was always a death sentence. How Grace and her family became a part of Isabel Allende's extended family is reflected in the author's memoir sequel, The Sum of Our Days. A Buddhist, the extraordinary relative sparing of Grace’s cognitive function seems a gift of her mindfulness practice.

This January, through Grace’s efforts and those of other Peace loving people, a median is being placed on the Golden Gate Bridge. Grace explored the incidence of disability and deaths which had occurred on the iconic span. She set about diminishing the risks of such incidents reoccurring, by legal remedy. Figuratively, with both hands and legs bound behind her back, Grace has made more change than can reasonably be expected in any single lifetime. She is the Steven Hawking of the activist spirit.

Why is chronic disability and pain a Bioethical issue? The World Health Organization estimates over 37 percent of adults in the most developed nations, including 100 million Americans, have persistent pain conditions. Acute pain is increasingly associated with treatment with only opiates or adjunct medications, however chronic pain requires a more integrative approach, which is rarely available in the fast paced, computer documentation driven allopathic office visit.

Though film and television abound with story-lines about torture, traumatic accidents, sports injury, war or criminal assaults, these acute pain scenarios have well documented persistent pain sequelae which are not often addressed or anticipated. The hallmark of good palliative medicine is anticipation. Hospice care, or care of those dying eminently, is the latter part of palliative medicine. Palliative medicine is aggressive distressing symptom management. It is an approach which should begin, in accordance with our science, at the onset of serious disease and in all chronic pain. This palliative approach is frequently omitted, even when people have conditions known to bear heavy persistent pain like post traumatic stress disorder, traumatic brain injury, dysfunctional uterine pain or depression.

The Institute of Medicine proposed a blueprint for transforming pain in America designed to heightened awareness of chronic pain and its consequences, emphasizing prevention, improved management and self-management. Poor chronic pain management contributes to epidemic rates of prescription drug abuse.

Chronic Pain and Disability are beneficence issues. We now have new neurological science which is rarely applied in routine pain management. There is also a maleficence concern: inappropriate use and insufficient titration of prescription pain medications by prescribers, healthcare organization’s limits on providers time and rising commodification of health care.

Chronic pain, and the things that cause it, are justice issues. Pain disparity is the disproportionate incidence of chronic pain and worse pain management. That is, those who more pain afflicted do not often receive the benefit of new pain science and integrative care. In the United States, pain disparity is reflected by those who are people of color, very old, very young, gay, lesbian, bisexual, transgender, whose first language is other than the dominant speach, housed in the inner city and rural areas or are veterans of the United States military. The solution to diversion of prescription drugs can not be left in the hands of the U.S. Drug enforcement Agency. The doctor-patient relationship, expanded to include practitioners of known effective integrative medical modalities, is the better bet.

Bioethics Screen Reflections began supporting the film by blogging on it here in 2010, when its working title was FOREST OF SWORDS. That title has many references, among them being to a Buddhist koan, or a riddle to be released from solving in ones life. Here, the most relevant reference comes from Sanskrit: A forest perceived from a distance by a traveler seems filled with mango trees. The traveler hopes to gain sustenance from the mangoes for the rest of the trip. As the traveler approaches the forest, the leaves of the trees manifest themselves as blades. To survive, the traveler must move through the blades and somehow access the nutrition of the fruit. The evolution of this film’s working title from “ FOREST OF SWORDS” belies the journey toward “STATES OF GRACE.” It is a journey we a wish all survivors of serious trauma and chronic pain to make.