BLACK AND WHITE VS BLACK OR WHITE: Bioethics and Mixed Race Families

BLACK AND WHITE, screened at the 2014 Toronto Film Festival and later at the Mill Valley Film Festival, in October 2014.  The same title was also used to discuss the film in various film trade publications. However, the film’s title changed by the time of its USA distribution date, January 30, 2015. The word ‘and’ was replaced with the word ‘or’. That is, the film title became BLACK or WHITE.   Use of the word ‘and’ better reflects the courage of writer-director Mike Bender in broaching contemporary issues around race and class. The film only superficially reflects two entities fighting one another. Much more prominent in the story is a struggle for Black and White to save each other. Bender dares to suggest, we might all be in this mess together, sinking or swimming.  Ignoring antebellum period themes,  it’s a new take.

Rowena (Octavia Spencer) is the black grandmother of mixed race eight year old girl, Eloise (Jillian Estell).  Rowena is compelled to fight for custody against the child’s white, recently widowed, alcoholic, up scale lawyer grandfather, Elliott (Kevin Costner.) Rowena, and Elliot’s now dead wife, had a longtime truce regarding their grand-daughter’s best interest. The Black and White grandmothers together decided that the girl should live with the affluence Elliot’s family income could afford. The girl's residence was conditional on a grandmother being in the Brentwood house. Rowena, aware of Elliot’s flaws in parenthood, including alcoholism worsening under the pressure of grief, considers the previous custody arrangement void.

Rowena is no slouch. She is a more typical black woman than the average film portrayal of a woman of her race, middle-working class and age.  Industrious, she operates several small diversified businesses out of her home in the intact black community of South Central Los Angeles, a community rarely reflected on screen. Through her toil,  a decent though not opulent lifestyle has been afforded to her large extended family, most of whom live nearby and are doing well. Among her children, a lawyer son is forced into the custody battle. However, there is one  exception to Rowena’s pride, another son, a reprobate dope-fiend. Any American family, of any race,  with enough living children is bound to have one of the type. Rowena’s fallen son is the father of Eloise. The child’s mother, attracted to the degenerate, died in childbirth.

Obvious bioethical concerns in BLACK AND WHITE include concerns for the best surrogate for a child whose parents are no longer able  to parent; the age of autonomous decision making for children and historical injustices inherent in racism and classicism. The role of grief, acute and prolonged, in the context of substance abuse stands out. In the end it is the lagging of social construction,  far behind the science of the human genome, that keeps viewers watching.

Stephen Riley wrote an analysis of stresses, those identifying as Mixed Race, felt in filling out Box 9 on the 2010 United States census. He describes people agonizing about accurately portraying their racial identity. Riley states “For those who desire to portray their ‘accurate racial’ identity, I have news for you —  ‘racial accuracy’ is an oxymoron.  ‘Race’ as a biological, or anthropological construct is an utter fallacy.”

Support for leaving behind personal struggles with ‘identity’ is in the census instructions for Box 9, “Race is key to implementing many federal laws and is needed to monitor compliance with the Voting Rights Act and the Civil Rights Acts and are also used to assess fairness of employment practices, to monitor racial disparities in characteristics such as health and education and to plan and obtain funds for public services.” Riley proposes Mixed Race people should check the box which best defines, “How others identify you.”
BLACK AND WHITE offers brilliant honest images, dialog and acting in this sometimes humorous, other times painful,  self-reflective story. Mike Binder’s approach is not as facile as people might find comfortable. The film BLACK AND WHITE suggest that race is a diversionary tool preventing people from getting to the real work of survival in this millennium. 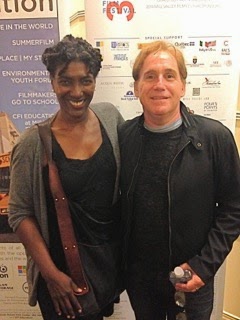