PART II: MY LOVE AFFAIR WITH THE BRAIN Bioethics and Meaning Derived from Science 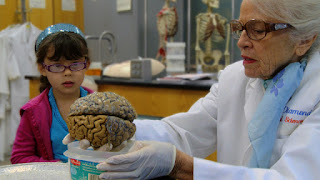 Catherine Ryan and Gary Weinberg’s documentary film MY LOVE AFFAIR WITH THE BRAIN shows Dr. Marian Cleeves Diamond, PhD is not only a theoretical scientist but also an applied one. The Nuremberg Code—the rules for research conduct arising from the Nuremberg trials—has ten points. The second of those ten is that: Experiments should be such as to yield fruitful results for the good of society, unprocurable by other methods or means of study, and not random and unnecessary in nature. Dr. Diamond’s scientific integrity at the work bench has yielded a change in how we view human capacity.
Luna Productions film shows a field clinic on brain growth, Diamond’s project, Enrichment in Action. It uses findings of the doctor’s brain enrichment research to directly benefit impoverished, orphaned children. In Cambodia a group of children are provided with an environment fortified with supplementary vitamins, language skills, computer lessons, and promotion of the children’s wider social acceptance. She has been facilitating, watching and documenting those children’s growth over years.
There are multiple other clinical applications to the insights of brain malleability derived from Marian Diamond’s work. In the not too distant past, medical students were routinely taught that only a tenth of the cerebral cortex (the heaviest part of the brain) was actively used. The implication was that if brain cells were lost that portion of the brain’s function was permanently diminished. The observation that nurture, as well as abuse, can alter brain function through structural change—is among neuroanatomist Marian Diamond’s major contributions to scientific history. That truth defines a choice to be made, by humanity, about how we can proceed, as individuals and a group. We either promote brain health or we do not.
The idea of the mind-body complex evolved in western culture more slowly than in others. After time in China, Kenya and Australia, Dr. Diamond’s paradigm expanded even the Mind-Body complex to include the significance of the brain as a switching station—validating a Mind-Brain-Body complex as it were. Science at its best over turns old beliefs with new information. There are many applied applications to Diamond’s science. Clinicians now see their tasks as recruiting brain cells and promoting their growth and function within the window of best opportunity to promote neuro-plasticity, or brain flexibility. This is as important in maximizing function after any neurological insult like stroke or traumatic brain injury, dementia or aging—as it is in early childhood development.
Those recently experiencing the birth of a baby in a hospital may notice that policy has shifted so that mothers and babies are no longer easily separated in the first moments after delivery. We now know that immediate breast feeding is essential for best growth and development of infants brains, and also prevention of chronic disease later in life for children and their mothers. These phenomena are in part nutritional but also the effect of early bonding—nurture.
There is a story told by a friend who was sitting for days to become a Buddhist Priest. It was arduous. On her brief breaks she would light a stick of incense at the window. Doubting that she may have chosen the wrong direction for her existence she asked the universe for a sign. Just then a magnificent shooting star crossed her eye-line. Then she wondered, ‘But what does it mean?’ This is the quandary of both life and science.
Marian Diamond has written, “The greatest thrill in my life up to that moment was when I held my first newborn child in my arms against my breast. I knew why I existed.” That child was born in immediate proximity  to Dr. Diamond’s completion of her PhD, in 1953. Though her life’s work was set at that time it would take decades to realize its meaning.
MY LOVE AFFAIR WITH THE BRAIN spreads the word not only about what Dr. Diamond’s research has been but what it means. Diamond has summarized her take home lessons from her 60 years in brain research. She believes all the signs lead to the idea that brain health is dependent on five things, diet, exercise, challenge, newness, and love.

I think this is an informative post and it is very useful and knowledgeable. therefore, I would like to thank you for the efforts you have made in writing this article. conjuros de amor

The information you have posted is very useful. The sites you have referred was good. Thanks for sharing.. Alpha Neuro Health

It’s appropriate time to make some plans for the future and it is time to be happy. I have read this post and if I could I wish to suggest you few interesting things or advice. Perhaps you could write next articles referring to this article. I desire to read even more things about it! SpeakEasyTherapyLV

Very good written article. It will be supportive to anyone who utilizes it, including me. Keep doing what you are doing – can’r wait to read more posts. herbal life products online

Just to be helpful for people interested in Nootropics especially Modafinil, I found another site that has some helpful articles and information.

There is also a discount code (that works) if you want to buy Modafinil online (aka Modalert). Don’t worry this is not something spammy. It’s also more for the US and UK market. Hope it helps. See website below. Thanks all.

Massage the painful area of your shins up and down and from one side to the other with the ice cup and apply as much pressure as is comfortable whilst doing so, remembering never to hold the ice in the same spot for longer than necessary. thermoplastic splint

Only ever apply ice for as long as it is comfortable to do so, do not try to push yourself beyond pain barriers when there is no need to. massage San Jose