I AM MARIS: Portrait of a Young Yogi Managing Anorexia Nervosa by Her Own Hand 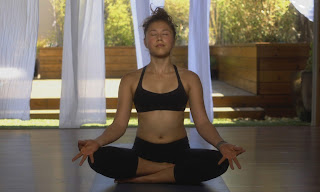 This article was originally published on April 21, 2019, by Bioethics.net  Where the World finds Bioethics

“You are only as sick as the secrets you keep.” It’s a saying used in a wide variety of mental health self-help communities. The phrase is also the apt tag line for Laura VanZee Taylor’s profoundly emotive feature length 2018 documentary film, I AM MARIS (IAM). Taylor along with producer Ariana Garfinkel and— most importantly— the film’s artist-writer-protagonist Maris Degener, document the perpetual state of recovery required to quell manifestations of mental illness. The story copes with the myriad incognito fluctuations of minds burdened with the disease anorexia nervosa. This is a heartwarming optimistic story looking through the tunnel back toward mental health from a position of calm possibility.

In Maris’ case, allopathy could keep the adolescent anorexic alive but could not help her live a life truly worth living. The latter was the task of a broader approach. Before she started college—and after bouts of anorexic mortal danger—Maris was fortunate enough to find a Yoga practice and community. Compulsions for order were channeled to a healthy affinity allowing the young woman to reclaim her alienated self. She became proficient enough to teach, to become a Yogi, before she was seventeen.

Yoga has been shown helpful in other liminal spaces of mind-body transition like palliative and end of life care.  Self-expression through art and movement is a tried and true approach to self-reflection, with or without, mental health concerns.  The full therapeutic scope of art and movement therapy has not been fully explored, clinically documented or rationalized across diseases. It’s as if Art Therapy is considered a “no brainer category,” leaving it, like many other complementary therapies, underfunded, antidotally studied and often inaccessible.

I AM MARIS stands out in large part because it is created in Maris’ voice. Director Taylor has the capacity to let “the talent” take the lead.  The protagonist's writings and drawings inform the process of documenting her illness and recovery. Art and writing often appear as self-expression but also as self-medication for those with mental illnesses. Maris’ artwork screamed alienation for years before her diagnosis was clarified. Her images and poetry reflect dire internal realities which caused others to look away from— or rationalize—the artist’s suffering. Good psychotherapy, occupational therapy, art, music, dance, and other movement therapists—given access and time—aid stability in many persons with mental trauma and other mind-body illnesses.

The viewer hears Maris read from her journals and sees the drawings which had been created during periods of crisis gone by. This is a past tense sensation. In a stroke of filmic genius, director Taylor also chose to animate aspects of Maris' inner thoughts gleaned from her writing and her on-camera interviews. Maris’ words and surrealistic artistic style are adapted for the animation sequences created by illustrator-animator Brandon Eversole. This unique collaboration results in a kind of participatory effect for the viewer— not hearing a flashback—but feeling it in real-time—particularly as the young woman blooms beyond her illness.

Maris’ mother’s on-screen interviews are an essential through-line in the film. Her mother knows things about her daughter that Maris herself does not know. These segments are profound for their honesty. The mother shares that subtle insidious signs of illness might have been apparent well before her daughter’s adolescence. The turmoil and fears of the girl’s parents are laid bare as well as the joy of this one kid to have found ‘a way’ . Like most thoughtful parents, Maris’ were loathed to slot their child into a “sick role.” The mother speaks of worries and feelings of guilt for not having ‘caught on’ faster. It draws tears from the audience who understand that the speaker on screen is among the strongest of the strong. She kept and still keeps the faith that her daughter will be safe while simultaneously terrified another shoe might drop.
Maris’ parents are in good company with their struggle to understand anorexia nervosa. Though awareness of eating disorders became prominent in the USA circa the 1970s, through star power of musicians and actors, such conditions have been documented for centuries. During the latter part of the last century, we thought these sicknesses were narrowly distributed to affluent young White women. Eating disorders are no longer thought confined by race, ethnicity, gender or class. It turns out these diseases are equal opportunity stalkers. Peer recognition of eating disorders’ signs and symptoms is low in college students—the same populations often affected with those diseases. Similarly, medical students show disproportionately high stigmatization of mental illness and suicide--afflictions for which they themselves carry significant burdens.

Latina incidences of anorexia nervosa and identification with eating disorders are as high or higher than White women. Race is defined here as science does—as a social construct. Though important in Maris’ story, her USA census grouping is not the focus of the film. But, race and ethnicity are worth mentioning here. Maris grew up in an affluent to middle-working class, smaller community in California. There were few people of color in her school. Maris’s family, like many, is blended multi-racial and multi-ethnic. Maris is visibly Latina as is her mother. On direct questioning, director, Taylor, explained that during filming Maris did exchange some thoughts touching race and ethnicity—or being ‘the other,’ especially in school. To be clear, race and ethnicity is not the focus of  I AM MARIS. The exclusion of that dialog was one of many “good calls” which director Taylor made—opting to make mental illness and its management the peak of attention.

It is the universal qualities of mental illnesses, their manifestations, and the need for expanding tools of care for which IAM makes a clarion call. The point of the film is not how people are different but how we are the same, or at least on the same spectrum. But, IAM also underscores that the Yoga therapy saving Maris’ life is an alternative not often accessible to all because of cost and limits on therapeutic ingenuity. Despite them being cheaper than almost any psychoactive drug, as well as economic terrains.

The Patient Protection and Affordable Care Act acknowledges state licensed clinicians' right to prescribe complementary therapies, but it only begins to lay a foundation for normalizing use of those strategies. Insurers still are not obligated by law to pay for non-allopathic therapies other than acupuncture. Even now, amid recognition of epidemic pain disparity, opioid addiction, mental and physical pain crisis, Traditional and Complimentary therapeutic management of these illnesses are being ignored. Maris was fortunate to be in a community which could absorb the cost of her most valued treatment—Yoga.

Maris Degener’s journey toward recovery is ultimately self-guided. There is magic in movement. During the buzz of the 2018 film awards season, magnificently heavy with works by and about women, a little film, I AM MARIS tiptoed onto the scene quietly. It challenges professional and societal sole allegiance to magic bullets and psychotherapy for managing mental illnesses, teaching that the compliments of the Arts and the wisdom of the ages may do better.

I AM MARIS is available on Netflix  For more information see I AM MARIS .