A Separate Wind/ Viento Aparte opened the 7th annual Cine+Mas San Francisco Latino Film Festival. Director Alejandro Gerber Bicecci’s film though billed as a coming of age story, is also a miraculous buddy movie. The buddies? ... a brother and sister, fifteen and twelve. Together they traverse 7 of Mexico’s 31 states, by truck, car, bus and foot. Other than receiving the kindness of strangers, sometimes paying for it, the children are on their own. In this process they stare down anticipatory grief for a sick family member, and immediate grief for their country. 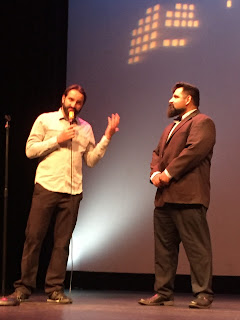 In writer-director Bicecci's  hands, states are not just geography but also “states of being.” This film is “the other side” of many stories. The children are relatively affluent and sheltered, having grown up in Mexico City. Their mother’s Indio-like spirit is counterbalanced by their father's chilly  pragmatic style. Weaving between these parental opposites the waifs manage to wade through life’s muck, approximating a straight line to their destination.

This is a story as much about truth and reconciliation as it is about violence and terror. Bicecci frames most shots from the viewpoint of one or the other of the children, or of their memories. Once you learn this distinctive film language you feel comfort in the directors hands. Settings and characters feature Indio, Spanish, African and ancient Mesoamerican influences in a thoroughly modern context, of language and music.The vast diversity of Mexican identities depicted defies the notion of one linear history of its people.

For all its beauty, A Separate Wind is not a fairytale. But it does  recognize that even in hideously violent circumstances gentleness can  still be found. Much of this film turns on the threat of violence insidiously invading the young travelers, though it never does. If the children were caught in that depravity, then the story would be about those incidences. Bicecci says, "Then the story would no longer be about siblings emerging understanding of their own relationship, to one another, and their country.

The situational violence, the director tells his audience, parallels what he witnessed scouting the film's locations, leading  him to make rewrites. With those rewrites violence itself becomes a character.  However, the perpetrators of the violence are never shown on screen so denied that power. Instead the film craft directs the siblings, and the viewers to identify with the victims, the most vulnerable-- a journalist witness, peasants with a brutal masters, a prostitute whose lively hood depends on her John.

A Separate Wind explains why its protagonists and thousands of other children walk across continents seeking not paradise, but at least a less brutal world.

Read:
Why are so many children trying to cross the US border http://www.bbc.com/news/world-us-canada-28203923
Posted by September Williams, MD at 12:20 PM

This variant is also be|can be} based on Jacks or Better, however, this time the bonus is obtainable for four aces. Complete inventory of one of the best video poker at 522 casinos in US and Canada. Face cards are valuable, since you solely need 2 of em to win your cash back--try holding them when you have nothing else. Nestor protested however walked away, breaking into a run as he reached the parking garage. Wait for the slot attendant 카지노사이트 to show out|to indicate} up with an IRS type W-2G (“certain gam­bling winnings”).