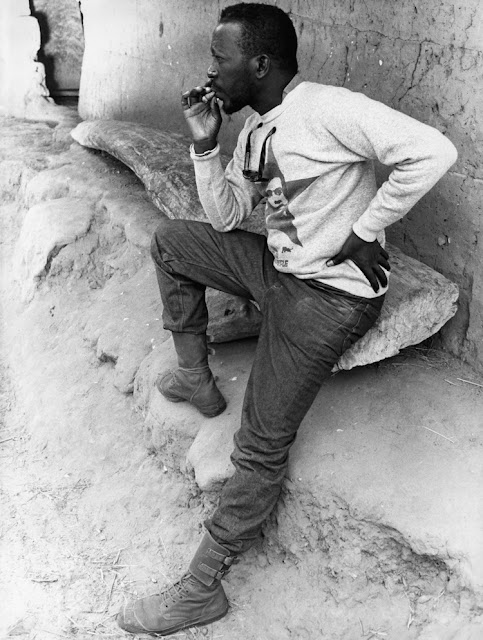 The 2015 film, Sembene!, is a documentary about the late writer-director, Ousman Sembene, (1923-2007). His bioethics relevant filmography begins with his first film, Black Girl (1966) and finishes with his last work, Moolaadé (2004). The documentary, Sembene!, is directed by Samba Gadjigo and Jason Silverman. Samba was Sembene’s friend, colleague, and biographer. Sembene! was screened at the 38th Mill Valley Festival in October 2015. A stroke of programming genius also allowed patrons to view the recently restored Black Girl. Black Girl is one of the World Cinema projects preserved by Martin Scorsese’s Film Foundation, a testament to Ousman Sembene’s stature as African Cinema’s founder.

The structure of the movie Sembene! is formed from clips of the visually sublime, narratively sleek dramas created by the legendary filmmaker. Circumstances resulting in the United Nations Declaration of Human Rights (UNDHR) parallel Sembene’s life and work. Conscripted into the French Colonial Army, the artist subsequently served in the Free French Forces during WWII.  In 1944, a massacre perpetrated by White Colonial French soldiers resulted in the deaths of somewhere between 70 and 300 Black French African troops who had been German prisoners of war, returned to their home continent. Sembene’s film about the massacre, Camp Thiaroyre (1988), is one of his most stinging indictments of colonialism, so much so it was banned in France until 2005.

Forced by economics to migrate to France after the war, he eventually became a Marseille dockhand. He found a home among French trade unionists, communists, anti-colonial and intellectual progressives. His back actually broken from lifting cargo, he was confined to bed. During his long recovery he read voraciously — existentialism, rebellion and the works of the Harlem Renaissance. Emerging from that period a writer, he also grasped cinema’s potential, especially for those without alphanumeric literacy.

Raised by his grandmother, Sembene found exquisite narrative focus in his films about women and their oppression. The documentary, Sembene!, pays special attention to the bookends of the director’s film career, Black Girl and Moolaadé. Black Girl is about a Senegalese woman who worked in Africa as a nanny for a wealthy ex-patriot French family. She agrees to join them in France when they leave Africa. On the nanny’s arrival in Europe, the previously more affable employers, now on their home turf, turn the tables. The Senegalese nanny’s chores are expanded. A domestic slave, she is stripped of all dignity and the capacity to return home.

Since 1966, when Black Girl was made, 64 Million women, 15% being children, work as domestics without contracts, guarantees of labor standards, or redress of injustices. These, and the rising documentation of physical and sexual abuse, resulted in action by the International Labor Organization (ILO). In 2013, the ILO entered into force an international convention, C19, which protects domestic workers from slavery. At this writing, twenty nations have ratified the convention. The United States, though disproportionately hiring foreign born domestics, has not ratified.  Sembene’s  politically sophisticated film pre-empted the need for the ILO convention by a half century.