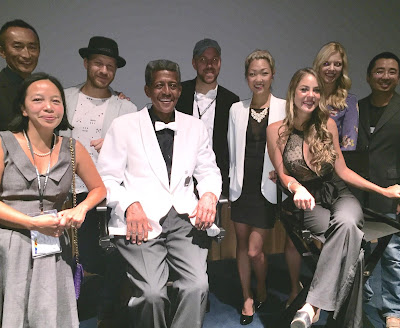 Director, Writer, Cinematographer and some Cast of INTERWOVEN
The film Interwoven had its world premiere at the 38th Mill Valley Film Festival,  October  9, 2015. It recalls the best of ensemble film traditions. There is a touch of John Cassavetes improvisational script development, a whisper of Pasolini’s version of Giovanni Boccaccio’s Decameron, and the texture of films like Grand Canyon and Traffic. This film is a part of the Peace Film genre (c.f. La Mission)

Unique to Interwoven, each character is initially stereotypical. Then, just as the viewer raises their palms to yawn, the inner-lives of the characters explode, or implode, on the screen in a web of inter-related complexity. Does the homeless sage deserve what he’s not got? Is a suicide prevention worker past giving a damn?  Can a violinist’s shrill racket be a prelude to virtuosity? This is not a preachy movie, though it does not shy away from message.  Everything doesn’t work out for this band of some sixteen Interwoven people, but everything does indeed work.

Directed by VW Scheich, and co-written with Uyen K (who is incidentally the director’s entertainment attorney-wife). Interwoven is an ambitious first feature for this team. Scheich breaks many novice rules.  A new director should use a small cast, few locations, and focus on dialog over geography. — These were not Scheich’s choices. Scheich confounds matters more by moving boldly across culture, race and class, over wide swaths of Los Angeles, creating a kaleidoscope of hope.

The ensemble of Interwoven includes award winning star Mo’Nique (Precious). However, the majority of the players are solid ‘work a day actors.’ In casting, the writer-director team operated as though documentarians, searching for the story, not beginning with a theme but instead a process. When the casting call went out, some two hundred actors responded. “That was just the first day, ” Scheich says. Actors were asked to share poignant stories about their lives during their auditions. Some of the actors describe being confused at having neither lines to read nor monologs to recite.

Interwoven highlights the power of listening in both its production style and themes. In this way the film gains its bioethical influence. Listening is an acquired skill, requisite for ‘hearing’, but not sufficient.  Hearing it is key to bioethics. Informed consent is a process which requires listening and hearing, not just signing a piece of paper.

The elements of informed consent require that a person is able to reflect back information delivered during disclosure of expectations if particular course of action is taken, it’s risks, benefits, and alternatives. Informed consent also demands that permissions are given for the course without coercion. The rules of informed consent  are are associated with  articles 6 and 12 of the Universal Declaration of Human Rights, which relate to personhood.  Matters of  family, spirituality, past struggles and personal cultural icons influence an individual’s capacity to give informed consent. Policy and procedures related to informed consent in medicine and human research are further operationalized in the Helsinki Declaration of the World Medical Association and its revisions.

Without heavy handedness, the stories of Interwoven relate to death and loss. The film evolves, perching solidly, on what the late bioethicist Paul Ramsey described as “the edges of life.”  The team creating Interwoven has an intelligence which allowed them to find the truth they were meant to interpret from the narratives heard. Many of the characters were cast with actors from whom the original stories derived. Interwoven adds value to those watching from a clinical medical ethics vantage. How do you give bad news? Where does drinking alcohol cross the line into alcoholism? What is anticipatory versus prolonged grief, and how do we deal with it best?

Declaration of Human Rights  http://www.un.org/en/documents/udhr/index.shtml#a6
Posted by September Williams, MD at 11:15 AM